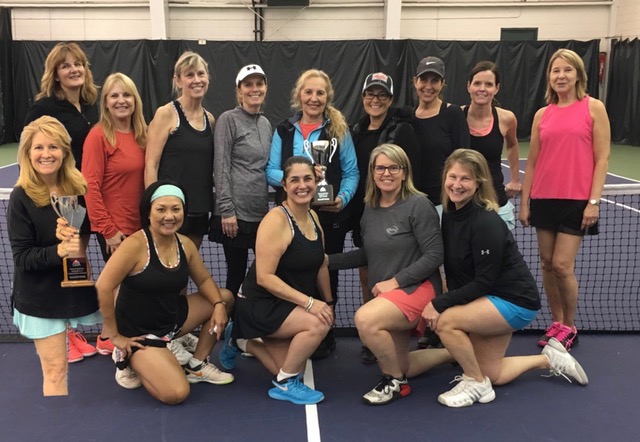 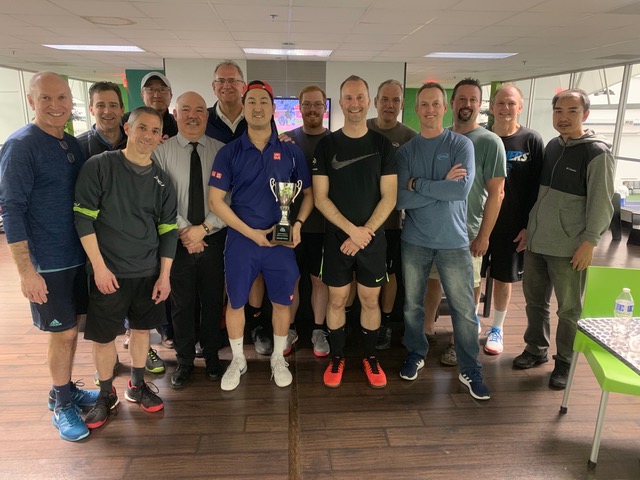 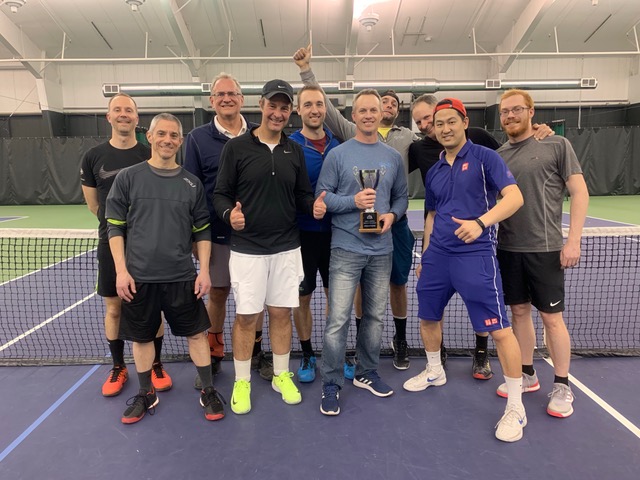 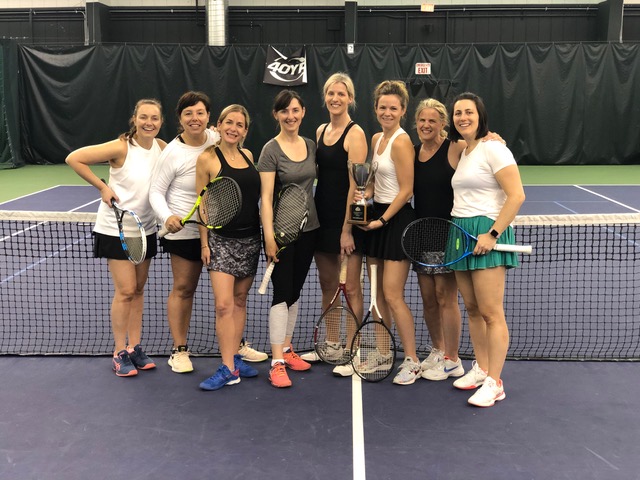 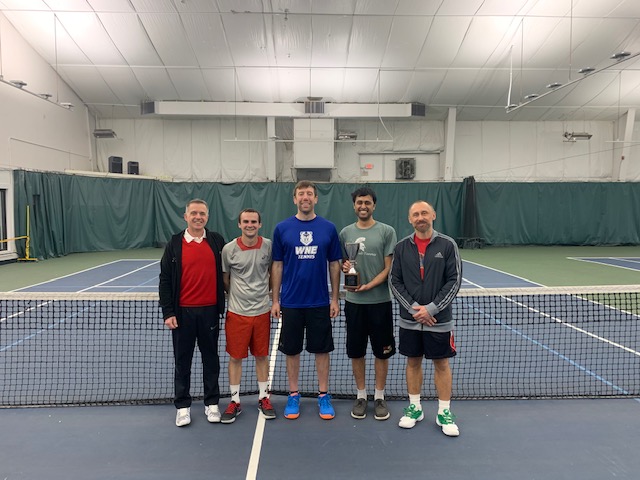 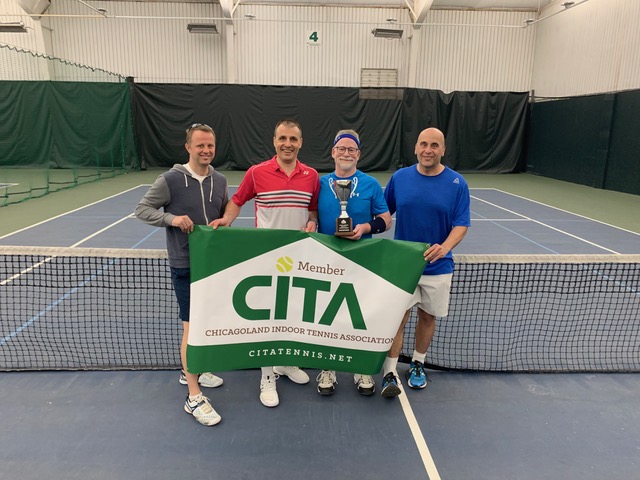 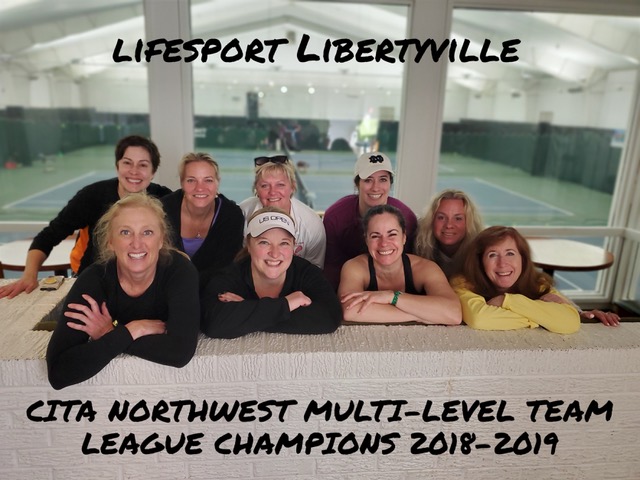 On April 21, 2018, the NWW Multi-Level league played their mini-playoffs. For the championship and the trophy, the 1st and 2nd place teams, Libertyville and Midtown-Palatine, were ready to put into play all they learned throughout the season. Both teams had won 2 of the 4 matches they played against each other during the regular season. Midtown-Palatine slipped past Libertyille for the top spot by winning two additional sets and winning 7-5. This is the 2nd year in a row Midtown-Palatine has won the Multi-Level Mini-Playoffs. Congratulations! Glenbrook and Midtown-Bannockburn vied for 3rd and 4th place. There was a slight eligibility problem, but the matches played on. All in all, it was close. Both teams won 6 sets each. And the game scores came out to 55-54 with GRC winning. But because of the ineligible player, all points went to GRC.
Pictured from left: Martha Davis, Tomoko Sekigami, Jen Grady, Eileen Felicelli, Jenn Zientarski, Ki Kellen, Wendy Rowden, Jessica Wagner, Saree Peltin, Maureen Ahern, Erica Donofrio, Michelle Kondrat
Not pictured: Allison Biergans, Renee Buxton, Erica Eisner, Anne Feely, Pierina Ferruzza, Nicole Koviak, Debbie Lancaster, Karen Majerczak, Allyn Selesky, Joanna White, Alpna Yousfi
Category: news
Comments closed 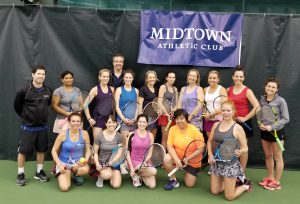 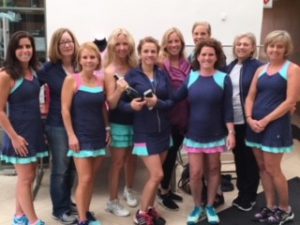 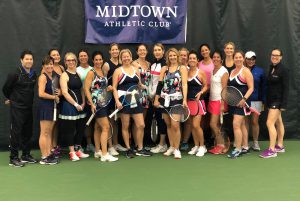 The NW Women’s 3.5 Mini-Playoffs took place on April 25, 2018 with Midtown-Chicago 1 and Midtown-Palatine taking each other on for the trophy. For three years in a row Midtown-Palatine has taken the top spot in the league, but Midtown-Chicago 1 said not so fast, we want to disrupt your winning streak and put our names on the trophy. MTC 1 won 7-5 over MTP. In the other matchups, MTC 2 squeezed by LIB 2 6.5-5.5, LIB 1 overtook FSSC 9.5-2.5, NSRC kept their 7th place finish over CPAC-E 10-2, RTTC tied with RCLB in sets but came out ahead in games 52-46, and CPAC-West 2 battled it out with their sister team CPAC-West 1 with CPAC-West 2 winning 9-3. 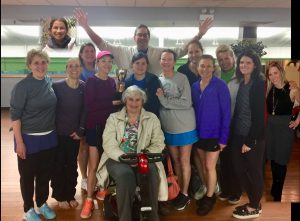 On April 20, 2018, the Northwest Open Championship took place. North Shore 2 was competing against College Park East for the trophy. Both teams have solid lineups and looking at the match scores the matches were competitive. North Shore has pretty much locked in on this trophy except in 2014 and 2015 when College Park East won. Congratulations to North Shore 2 for their 3-peat! Midtown-Palatine edged out North Shore 1 for 3rd place. Their sets were tied but MTP won 72 to NSRC 1’s 61 games. Northbrook edged out Midtown-Chicago and took the 5th place spot. And Libertyville remained in 7th place against FSSC. Great playing everyone and see you on the courts!
Category: news
Comments closed

NW Women’s 3.5 Mini-Playoffs
The Northwest Women’s 3.5 season came to an end on April 26th with mini-playoffs played by all teams in the league. After 13 weeks of matches, the top 2 teams vie for the trophy with the rest of the teams trying for one last win. For the 3rd year in a row, Midtown-Palatine won the NWW3.5 mini-playoffs with a decisive win over College Park. This is the 2nd year in a row that Midtown-Palatine and College Park East faced off against each other in the mini-playoffs. Last year, Midtown-Palatine was in 2nd place going into the mini-playoffs and took the top spot from CPAC-E. This year, from the end of October on, Midtown-Palatine held on to the #1 spot for the rest of the season. The other matchups were as follows: Midtown-Chicago kept their #3 spot against Libertyville 2. Libertyville 1 moved ahead of Glenbrook taking the #5 spot. Lincolnshire won against North Shore for #7 and #8 respectively and Five Seasons and RC Lake Bluff finished off the pairings with FSSC over RCLB.

On April 22, 2017, the Northwest Women’s Multi-Level league will play mini-playoffs to cap the season. There are 4 teams in this league. For the third year in a row #1 Midtown-Palatine and #2 Glenbrook will be playing for the trophy. Two years ago MTP won by 3 games and last year GRC won 8.5-3.5. The other matchup is #3 Libertyville vs. #4 Midtown-Bannockburn.